SDLC Methodologies: From Waterfall to Agile 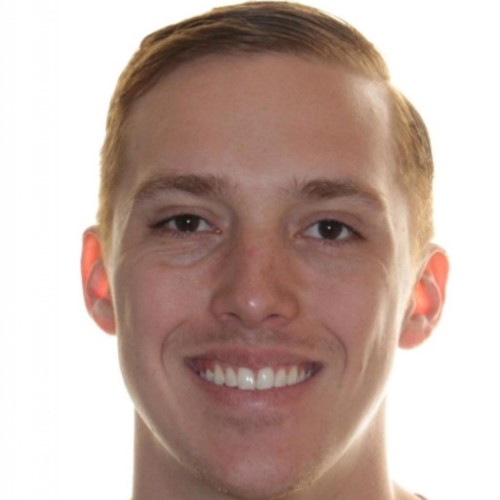 Oliver Trunkett is a Dallas marketing expert and writer who has been deeply entrenched in technology throughout his career. He writes about a wide range of technology topics spanning multiple industries and fields.

What are SDLC Methodologies?

We’re not just here to provide you with an exhaustive list of obscure SDLC methodologies. Instead, we’re going to set the record straight on SDLC Methodologies. On the web, you’ll find articles that will define and explain a long list of SDLC Methodologies and give a brief summary of each so you can “choose” which is best for your project. It seems simple and harmless enough, but this is not how SDLC methodologies are used in the professional software development world.

Most legacy SDLC methodologies aren’t even taught in University or bootcamp classrooms. Instead, today’s classes teach Agile frameworks like Scrum and Kanban. Despite this, SDLC methodologies have indeed evolved greatly over time, to the point where once-ubiquitous methodologies like Waterfall have become obsolete and irrelevant other than serving as the history that helps us understand the birth of Agile.

Today, the dominant SDLC methodology used by professional software organizations is Agile along with the many Agile frameworks like Scrum and Kanban that extend its principles beyond software development.
To understand the story of SDLC Methodologies, it is best to look at them chronologically. And while there are a number of methodologies that have been tried, all of them except the Agile family has fallen out of use today. You could even say we live in a Post-Agile world.

The First SDLC Methodology - The Waterfall Method - 1970s to 90s 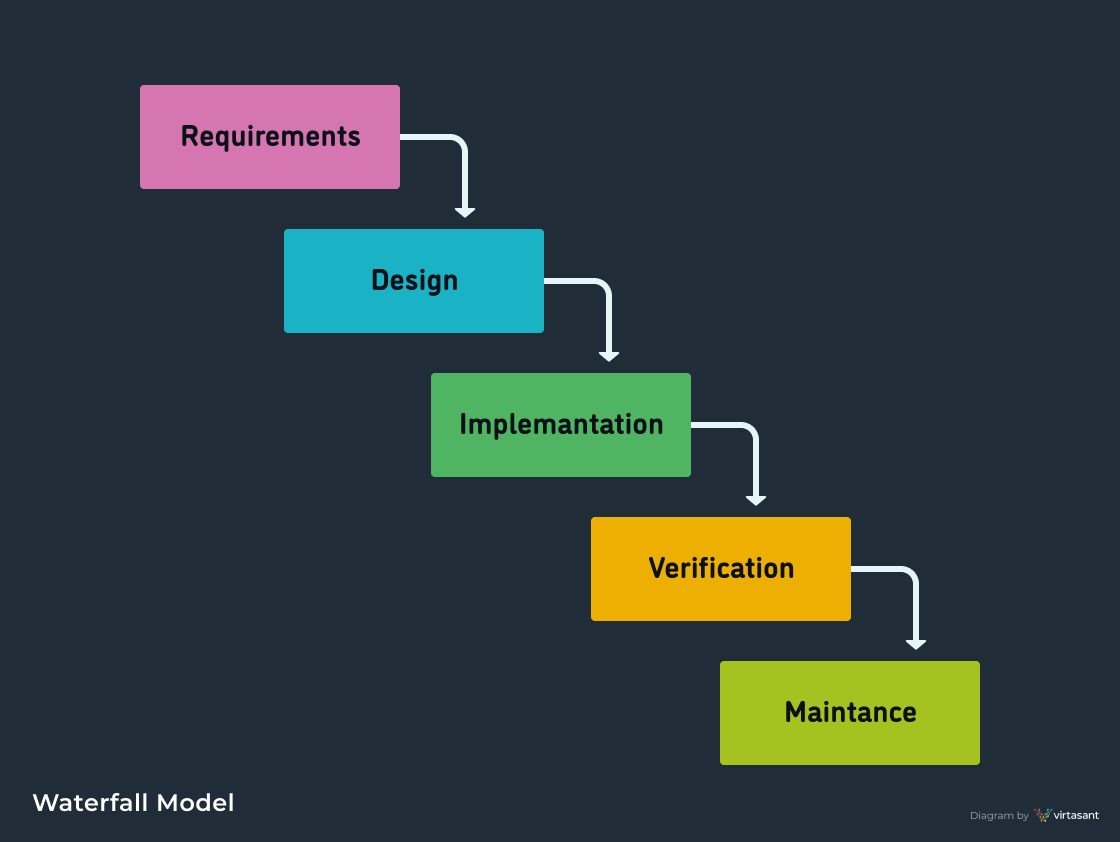 The first SDLC methodology to take hold in software development was the Waterfall method. Associated with Winston W. Royce, It was first introduced in a paper he wrote and used it as an example of what a bad methodology looks like: "I believe in this concept, but the implementation described above is risky and invites failure." Despite his warnings and guidance, the Waterfall methodology quickly became the standard and stayed that way for over 20 years.

Waterfall is broken down into phases, and other modern methodologies can even pull from these phases and utilize them, these phases are:

According to the Waterfall method, the software development process goes through all the SDLC phases with no overlapping and consists of a single development cycle. According to the fact that it is a linear-sequential life cycle model, any phase in the development process can begin only if the previous one is complete. Teams are large and everyone on the team (business analysts, architects, developers, tests, operations, etc.) all work within their own silos.

After the entire architecture, data structures, and functional designs are ready, the development team starts coding the software. Only after all code is written can integration and validation start. This means that the code is not tested before the Testing phase and only unit tests are executed during development.

Finally, the software finishes testing and is deployed to production and for the first time, where users are able to take it for a test drive. The Waterfall method can take several months or even years to complete, which means that if it doesn’t meet user expectations, changes are extremely slow and expensive. In many cases, defects never get fixed at all.

Likewise, due to the lack of feedback from customers or other stakeholders during the design and development process, it was quite common for Waterfall teams to build unnecessary or under-used features, leading to wasted time, effort, and money.

As technology leaders of the 1990s began realizing that the Waterfall method had a tendency to produce lengthy and costly business outcomes, they started seeking more flexible alternatives.

Waterfall was showing its age, and it never really worked well, to begin with. As a result, pioneers in software developed novel methodologies aiming to either improve or replace Waterfall.

Methodologies like Prototyping, Iterative, Spiral, V-Shape, came and went, and more modern frameworks like Scrum, XP (Extreme Programming), and Kanban were developed around the same time as the standard we use today, Agile. In fact, a lot of folks that signed the Agile Manifesto were XP creators and users.

Understanding some of these now-outdated models helps us better understand how Waterfall transitioned into Agile: 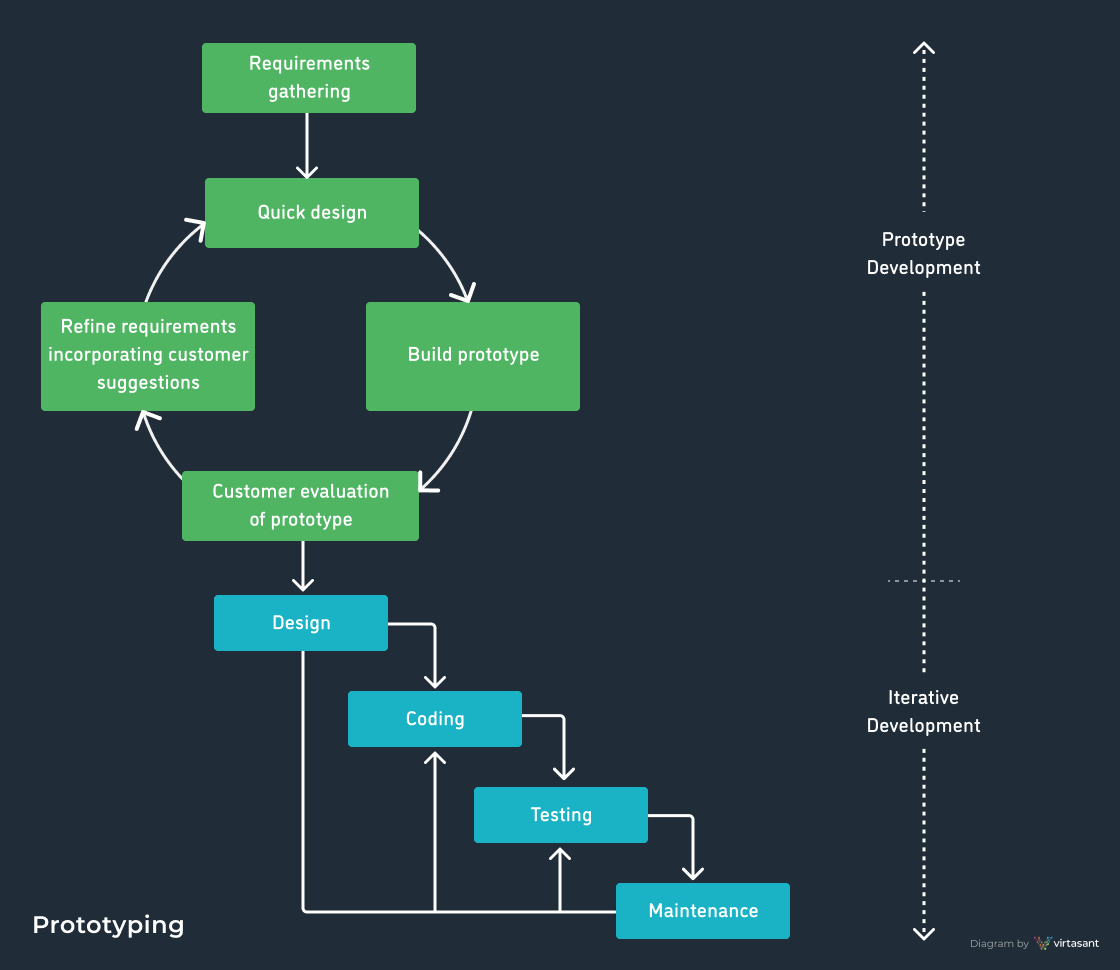 An outdated methodology that is no longer in active use, it served its purpose as one of the earliest alternatives to Waterfall, dating back to the mid 1970s. The Prototype method revolves around the creation of a low fidelity prototype for the purposes of collecting early feedback from prospective users. From there, prototypes are evolved into final software requirements. 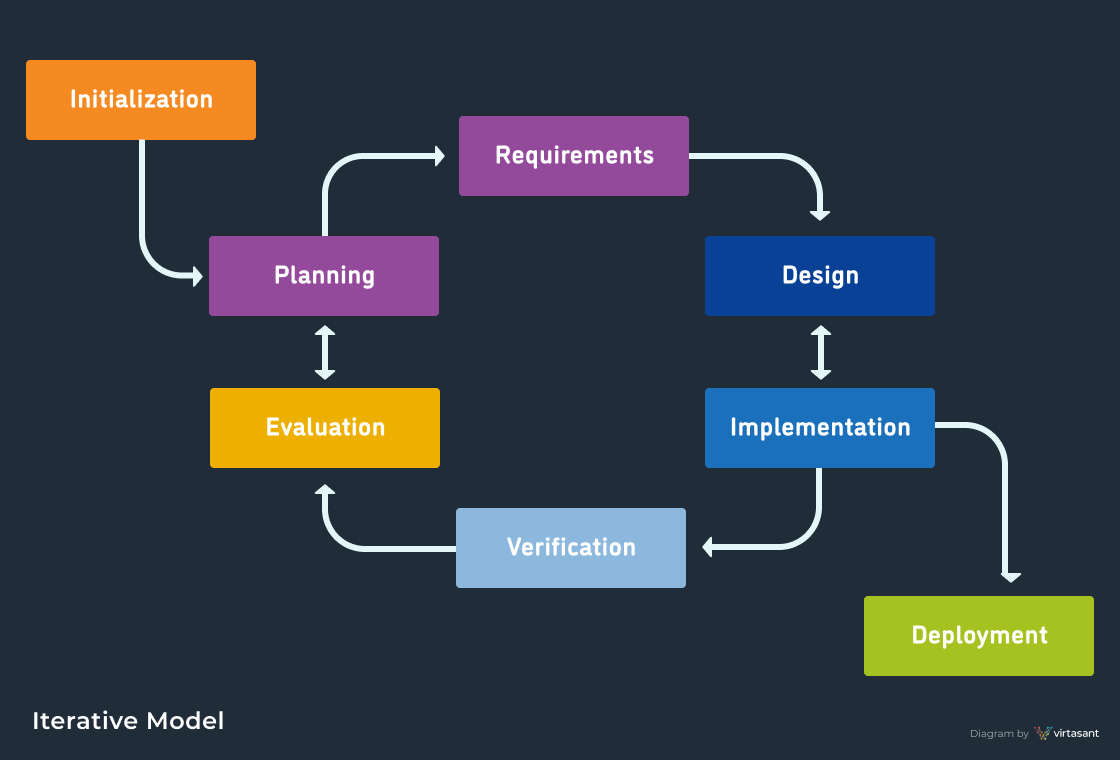 The Iterative methodology was an early precursor to Agile. It emphasized iterative and incremental action. Its earliest reported use was as part of NASA’s Project Mercury in the early 1960s.

With the Iterative Model, only the major requirements are known from the beginning. Based on these, the development team creates a quick and cheap first version of the software. Then, as additional requirements are identified, additional iterations of the software are designed and built.  Each iteration goes through all the phases of the SDLC and these cycles are repeated until completion. It was common for the team to work on several SDLC phases at the same time. 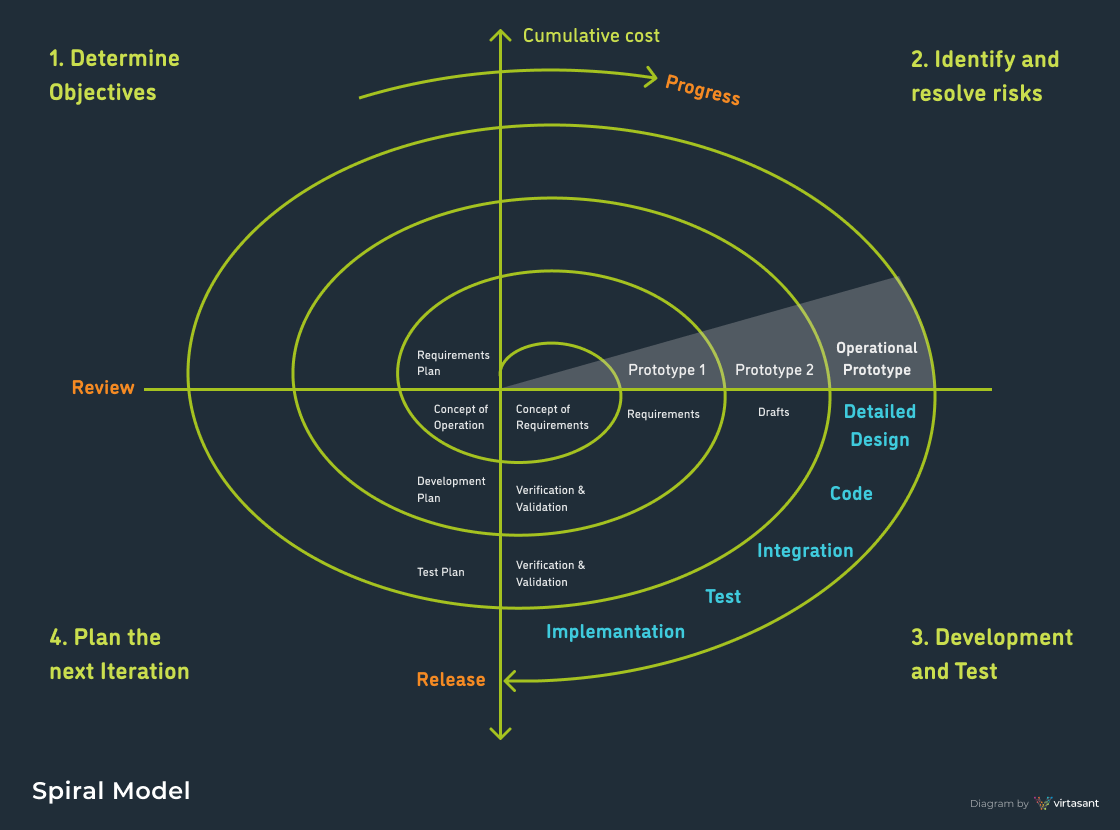 The Spiral Method is described by Barry Boehm in his 1986 paper “A Spiral Model of Software Development and Enhancement.” The Spiral Model boils down to a meta-model, which evaluates the specific risk profile of the project before recommending an approach that blends aspects of the other popular methodologies of the day, including Iterative and Waterfall. As such, it rejects a one size fits all approach to process model adoption. 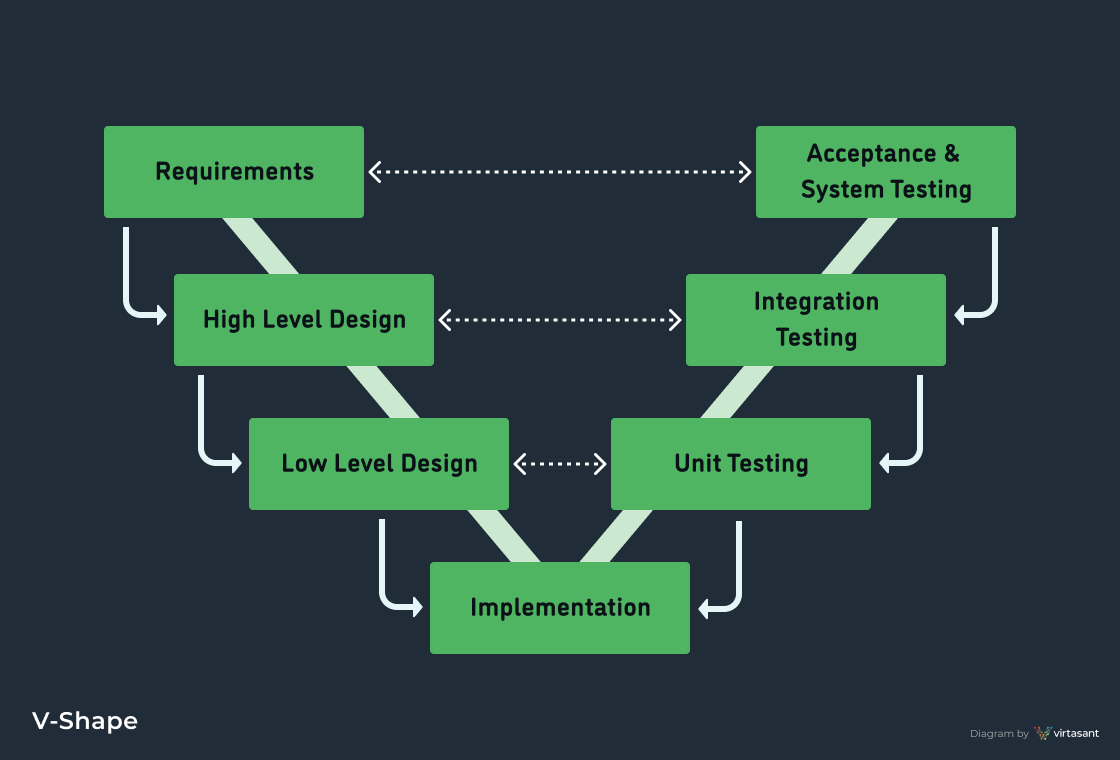 The V-Shape model is named after its two key concepts: Validation and Verification. In the Verification Phases, requirements and designs are created. Each Validation Phase has a corresponding Verification Phase, where testing and user acceptance occurs. These two phases are linked together by the Implementation (or coding) phase.

The New Millenium: Agile Takes Over

With no single methodology presenting a suitable alternative to Waterfall, which was woefully too slow and risky, 17 pioneers in software engineering gathered to create the Agile “Software Development” Manifesto on February 11th, 2001. 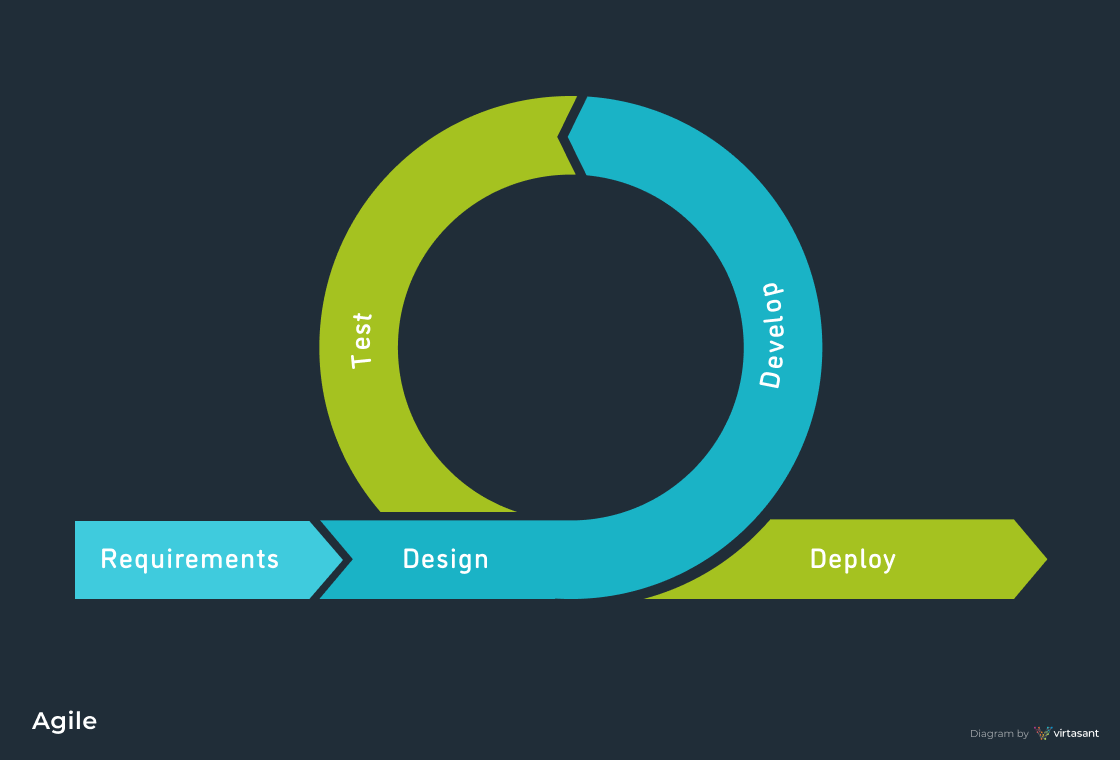 Agile is the mainstream methodology used in modern software development, and expands its influence beyond coding into many aspects of product development, from ideation to customer experience.

The Agile methodology breaks a project down into multiple cycles, each passing through some or all of the SDLC phases. The focus is on people and how they work together to get the project done. Agile calls for continuous collaboration between team members and stakeholders with regular cycles of feedback and iteration.

Agile Roles assign responsibilities to members of the team. They are different than positions as a single person can take on multiple Agile roles depending on the scope of the project. Conversely, multiple people can share the same role.
Here are some of the roles you could see in an Agile project: 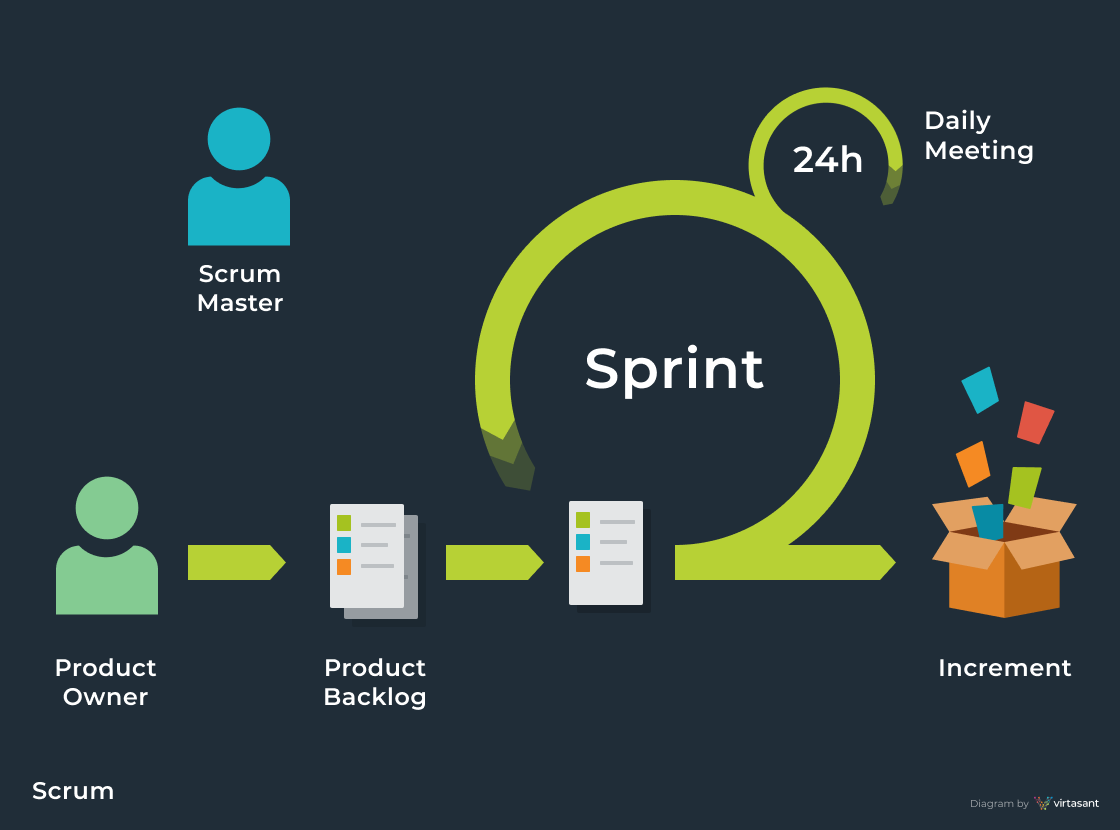 Scrum introduces the Scrum Master role to the Agile method. The Scrum Master’s job is to manage and improve processes, help the team stay authentic to Agile values, and focus on maximizing productivity. A good Scrum Master ensures that the process and progress are transparent to all stakeholders. 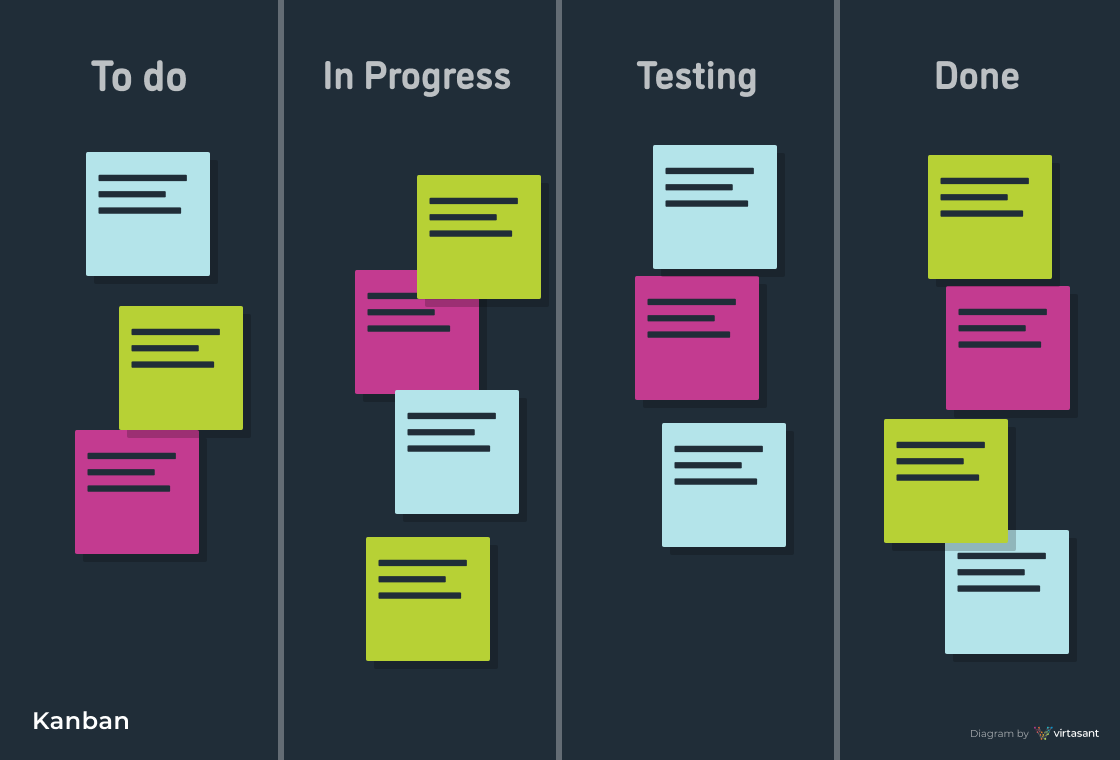 Kanban is a scheduling system framework for the Agile-eque Lean methodology. It doesn’t have its roots in software development, but synergizes very well with Agile and has become a staple of Agile teams.

Kanban got its start in lean manufacturing, where Toyota applied the same “just in time” principles that supermarkets use to manage inventory stock levels based on customer demand. Kanban, meaning signboard in Japanese, uses cards to track and support the production system by visually showing the steps within the process and how long each step is taking using cards.

Kanban has a host of benefits when applied to Agile. You can limit WIP, focus on cycle time, and utilize just-in-time practices.

Kanban is sometimes compared to Scrum, which are similar in some ways, but are distinct frameworks:

In the Kanban framework, the team creates a visual representation of their tasks and statuses by using sticky notes on a physical whiteboard or by using a dedicated software application. Tasks are moved through predefined stages such as To-Do, In Progress, In Review, or Complete. 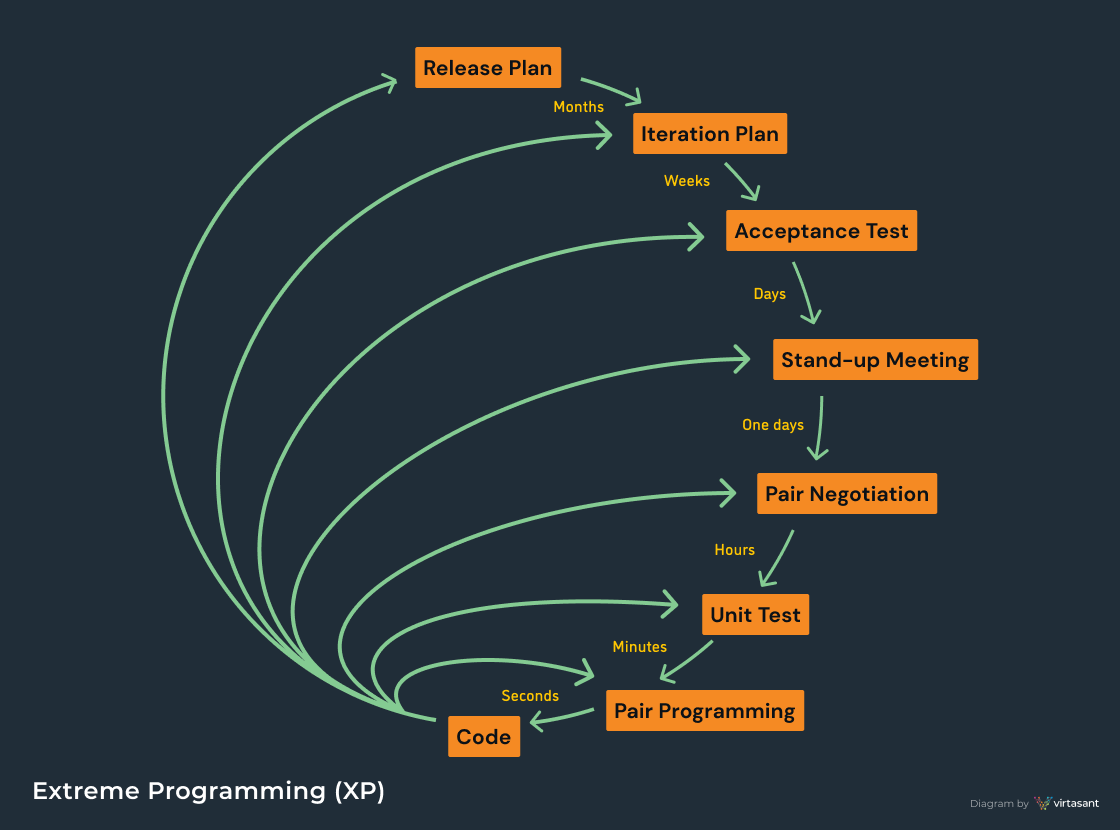 Extreme Programming is best known for the following: 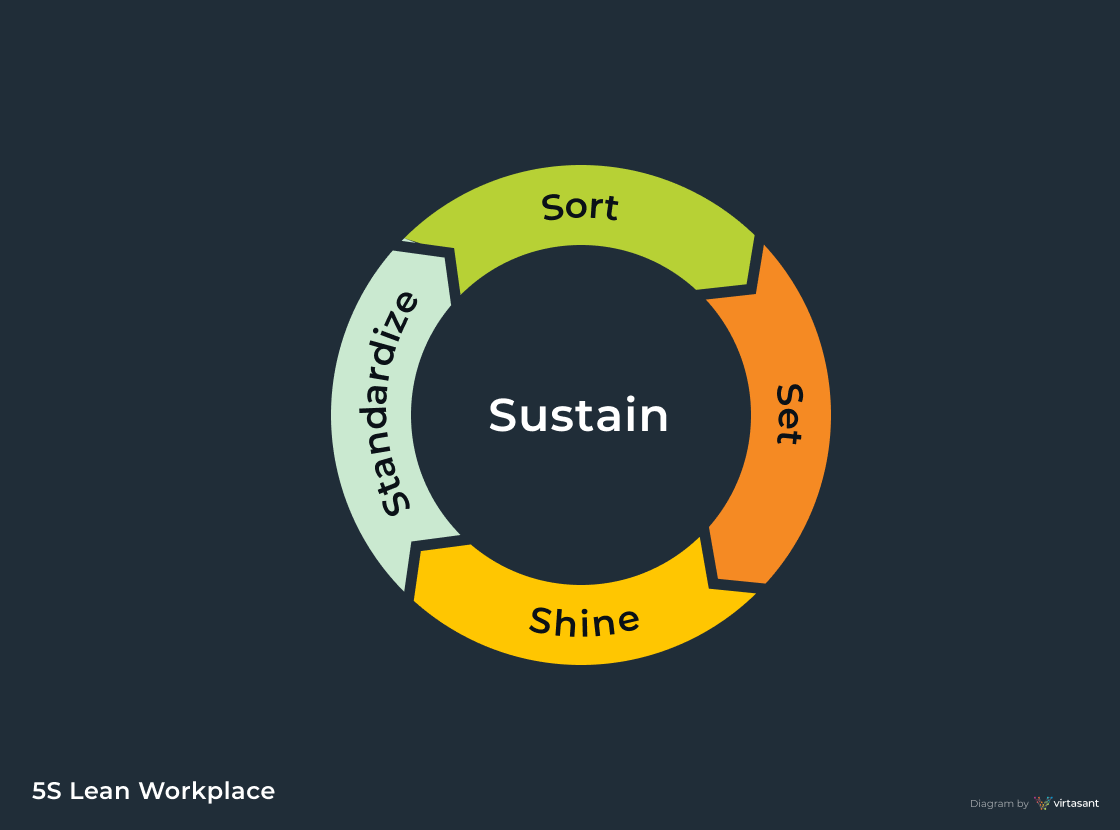 Lean isn’t a software development methodology. Lean’s origins go back to a manufacturing production method invented in the 1930s, officially given a name in the 80s, and more-formally defined in the 90s. Lean is a system that focuses on making more with less. Many have more-recently discovered that Lean works extremely well with software development, especially Agile.

While Agile focuses on delivering continuous value, the goal of Lean is to increase the speed and decrease the cost of product development. With Lean, the highest risks are wasted time and effort. Lean discourages multitasking and encourages team members to focus on what’s important in the present moment. By doing this, the waste associated with unnecessary documentation, meetings, or planning are eliminated.

Lean focuses on the following “just in time” principles: 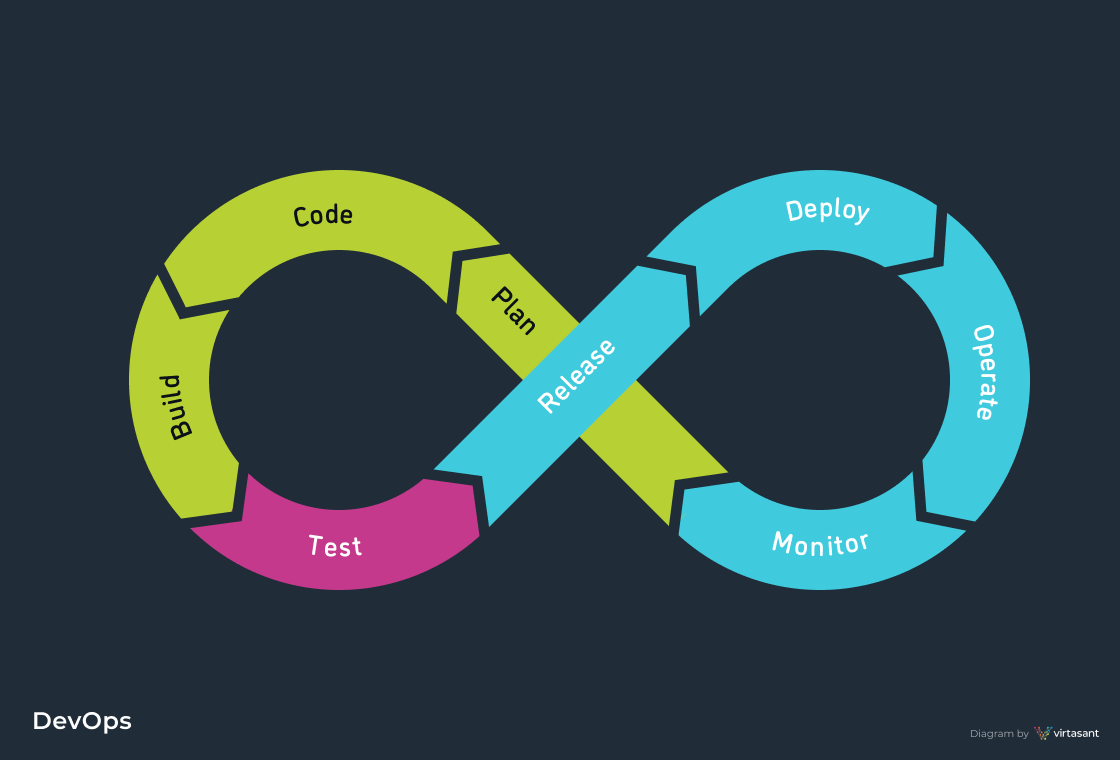 DevOps is not technically an SDLC methodology but it does share the goal of maximizing software project success and includes Agile-inspired concepts.

DevOps, just like Lean, can work alongside Agile to create an infrastructure that eliminates the barriers slowing development and delivery of the final software product. DevOps brings deployment and operation of the software fully into the Agile development process in the same way Agile brought testing and business analysis into software development. Ultimately, the team is empowered to be self-sufficient and take ownership of software development, shipping, and support. They use Continuous Delivery (CD) for frequent releases and to maintain a well-tested and high-quality codebase.

The DevOps movement started around 2008. The constant pressure to make rapid changes plus the emergence of a new wave of infrastructure automation allowed non-specialists to enter the space and highlighted the need for cross-functional collaboration.

New expectations around delivering more-regular software changes were a big motivation for creating DevOps. Desktop applications were being replaced by web and mobile applications, and instead of delivering physical media (CDs or DVDs), companies began providing Software as a Service (SaaS) over the web. As the industry’s challenges evolved, DevOps offered a solution.

SDLC methodologies have changed dramatically since the decades of Waterfall method dominance. These changes began intensifying in the 1990s as developers scrambled to find a method that would eliminate the shortcomings of Waterfall, exploring options like Spiral, V-Shape, Iterative, and Prototype. But as the new millennium arrived, software developers began to realize that Agile provided the flexibility and scalability that software organizations required. Agile has since been enhanced by frameworks that extend its principles into every aspect of product and software development, from ideation to deployment.